Why Republicans irk me so bad

So my new friends and newcomers to this page need to know this: I don't like either political party in this country.  Period.  Democrats are as equally worthless as Republicans in running this nation and both parties are responsible for making it so I have no representation in Washington because the only thing, and I mean the only thing, these 2 parties care about are rich people.  That's fine if you think Soviet style governing is what America needs (fucking traitor!) or if you think rich folk are obviously better than the rest of us and should be treated as royalty (stupid douche!) but not fine if you love freedom, equality and liberty.  This nation was once a British colony.  Why isn't it anymore?  Because the English who were here rose up in revolt against the rich people who were absentee landlords and owned and ruled the colonies from England.  Today's Americans have forgotten all that and happily take that oppressive yoke back upon themselves for reasons that just can't be fathomed.  What kind of people say "Freedom is too hard, rule us as kings and oppress us!"  Modern Americans, that's who!

Yet in America today there are 2 different camps fighting for dominance.  The moderate centrists of the Democratic party (who we are told are liberal but you'll have to prove that liberalness to me because I just don't see it and I'm a fucking liberal progressive baby!  I don't have a party or representation) and the right wing radicals of the religious Republican party who have more in common with Caesar than Christ but will get violently angry when you point that shit out to them.  Why are Americans so stupid that they prefer one party over the other?  Who knows?  I certainly don't get it.  In fact, I would be interested if someone could explain it to me.  And here we are.

So, you may be wondering, Mike, why then do I see all these anti-Republican posts and nothing anti-Democrat?  The answer is simple.  Republicans have done more to fuck up my life and world over the last decade or so.  Starting in 2001 when idiot King George Bush II allowed 9/11 to happen through today, it's been one cluster fuck after another with these assholes!  Like when that doctor fucked me up and I couldn't sue his ass.  Why couldn't I sue him?  Because Michigan Republicans got tort reform passed in Michigan which means any doctor can fuck you up bad and get away with it unless you can prove he did it on purpose.  That's right.  Never mind that I'm not this doctor's first victim or that he was well known by all the lawyers I spoke with while they told me there was nothing I could do and that this butcher still practices medicine at a local hospital.  I'd name him and the hospital but then --haha!-- they could sue me for defamation and libel because I can't prove that bastard did it on purpose.  Is that fair?  Of course not, but it is Republican.

So then these stupid assholes of the GOP decide to go to war with Iraq which they couldn't pay for (they planned, if you recall, to take over Iraqi oil production and use the revenue from that to pay for it which was a viable plan for all of a minute because the Iraqis sabotaged the oil production capability for that country) and between that and their massive deregulation of Wall Street, this led to the financial collapse that led to the Bush bailouts which is why this country is so far in the hole.  Republican solution?  Tax cuts for the wealthy!  Slash funding to social security and medicare!  Poor people don't get us elected!  Well, guess what you worthless sons of bitches, I'm on social security because the doctor you made it impossible to sue took away my ability to work!!!  How am I supposed to survive???  See, they don't give a shit about that.  All they care about are more donations to their campaigns from people who can give them in a second what I won't make in a year.  Is that equal?  Of course not but it is Republican.

Now let's look at my state where they rammed right to work laws and privatizing education down our throats in spite of the majority of folks being against these actions.  But Republicans don't give a shit because they, like the old Soviets, practice the Golden Rule: he with the gold rules.  Our state also passed medical marijuana yet the state attorney general, a radical right wing Chrtistian, has moral objections so in spite of 65% of the state saying they want it, the tyrant that is our AG has waged and won his crusade against what the people want.  Why?  Is it just?  No but it is Republican.

Now Democrats aren't off the hook with me.  They enabled these bastards and their abuse of power.  In some cases they've expanded the unconstitutional Patriot Act that Bush rammed down our throats after he fucked up by allowing the 9/11 attacks to happen unmolested.  But they at least are moderates and still attempt to throw us common peons a bone or two now and then.  I seriously don't like the drone program especially as it will now be used on us supposedly free citizens.  But we aren't free, we are their chattel.  They give us barely enough to live off and survive while they give the rich everything they could want or ask for, even a separate justice system because they are just better than the rest of us worthless mouth breathers.

Anyway, you get the idea.  I could go on but I'm making myself angry.

one of the fun things about living where i do is that you oft times find something useful on the streets the next morning like money or a cigarette.

today i found something useful and after tinkering with it for a while i began to think and i realized that these were the first real, clear thoughts i've had in weeks.  then i realized that everything that was worrying me and stressing me out was beyond my control and i was twisting myself into knots over the 'what ifs? and 'what nots' the 'could bes' and the 'might not bes' and the wibbly wobbly timey wimey stuff.

thanks dave tennant.
Posted by Unknown at 10:29 AM 4 comments

It's up to us America! ...
For the current edition, researchers assessed progress in 90 important environmental issues.
They concluded that meaningful progress had been made on just four - making petrol lead-free, tackling ozone layer depletion, increasing access to clean water and boosting research on marine pollution.
A further 40 showed some progress, including the establishment of protected habitat for plants and animals on land and slowing the rate of deforestation.
Little or no progress was noted for 24, including tackling climate change, while clear deterioration was found in eight, including the parlous state of coral reefs around the world.
For the remainder, there was too little data to draw firm conclusions.
This is despite more than 700 international agreements designed to tackle specific aspects of environmental decline, and agreements on alleviating poverty and malnutrition such as the Millennium Development Goals.
Among the report's "low-lights" are:
A few hours after GEO-5's release, the journal Nature published a review of evidence on environmental change concluding that the biosphere - the part of the planet that supports life - could be heading for rapid, possibly irreversible change...
Posted by Unknown at 11:55 AM 0 comments

On the backs of the people do rich men dwell The federal government informed an appeals court on Thursday that it has the right and the power to place GPS tracking devices on the privately owned vehicles of citizens without obtaining a warrant. This is in open rebellion to a Supreme Court decision from January that held that such warrantless installation of tracking devices on cars was unconstitutional.

In a case being heard by the Ninth Circuit Court of Appeals, the Obama administration argued that since the Supreme Court's ruling didn't specifically mandate the obtaining of a search warrant in all situations, then the justices intended to leave a loophole open -- a loophole large enough to mount a tracking device.

According to the Justice Department's spokesperson, "A warrant is not needed for a GPS search, as the [Supreme] Court ... did not resolve that question." As quoted in an article in the Wall Street Journal, the Justice Department has "advised agents and prosecutors going forward to take the most prudent steps and obtain a warrant for new or ongoing investigations," just in case.

This sort of circular reasoning is commonplace in Washington. The federal government claims that warrants are unnecessary, yet insists that its minions attempt to obtain them. This is precisely the vagueness and doubletalk that creates chaos and throws up a smokescreen behind which the palladium of American civil liberties is destroyed.
Posted by Unknown at 10:22 PM 0 comments 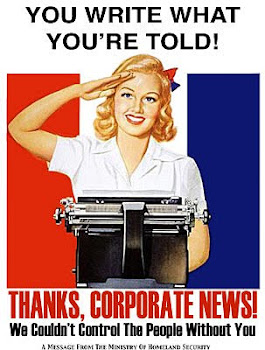